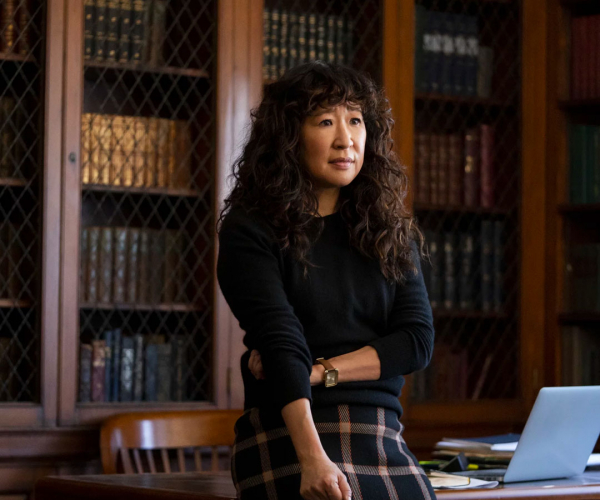 Three words, 12 letters, say it and I’m yours: new on Netflix. My affinity for falling head over heels for a brand-new series or film started long before the birth of the streaming service as we know it. Instead, it is deep rooted in my childhood-based Friday trips to Blockbuster. Choosing amongst what seemed like 3.2 billion titles, narrowing my decision down to one, and snagging a strawberry Ring Pop at checkout was the pregame. Snuggling up with my favorite tie blanket, popping the VHS tape into our dusty Panasonic VCR, and watching a new (probably very mediocre) flick was the main event.

Blockbuster may be dead, but my love for compellingly fresh shows, thrilling new movies, and a worry-free Friday night on my couch remains alive and well. Saying “hello” to another month means welcoming new-on-Netflix arrivals and honey, you’re going to want to grab your popcorn for these guys:

Number of seasons: 11
Release date: July 26
If surviving a zombie apocalypse and great character development are your idea of a good time, The Walking Dead has your name written all over it. With 10 seasons, there’s plenty of binge-watching to catch up on before the 11th (and last) season premieres on AMC later this month.

Number of seasons: 1
Release date: July 28
We fell in love with Netflix’s Love Is Blind early in 2020, and now that the dust has settled on the popular social experiment, the cast is back for a few episodes to reunite and share about their lives post-LIB. We’re finally done sobbing over Lauren and Cameron’s wedding vows and are ready for more.

Number of seasons: 2
Release date: July 30
We’ve had our calendars marked for the second season of Outer Banks for as long as we can remember, and after much anticipation and plenty of teasers, our favorite Pogues are back and better than ever. We’ve watched this trailer more times than Pope mentions his scholarship in season one, and when the new season is released, you simply won’t be able to reach us until we binge-watch the entire season.

Number of seasons: 7
Release date: August 1
If you’re on the hunt for a new comfort comedy show, you’re in luck because 30 Rock is finally making its way to Netflix. With an all star cast (Tina Fey, we love your work!), plenty of comedic relief, and seven whole seasons to stream, 30 Rock is the perfect low-maintenance show to serve as the perfect getaway from reality.

Number of seasons: 5
Release date: August 1
Clear eyes, full hearts, and can’t wait to fall in love with Friday Night Lights all over again. If you’ve never watched this football drama, you’re in for an absolute treat. Come for Tim Riggins’ impeccable looks and stay for the character development and the “on-your-toes” plot. Yes, Netflix, we’re still watching.

Number of seasons: 1
Release date: August 4
Cooking with Paris is the reality TV show that I didn’t have on my 2021 bingo card. The series is based off of Hilton’s YouTube cooking series with the same name and is rumored to have celebrity guests and plenty of iconic commentary that only our girl Paris can get away with. That’s hot, if you ask us.

Number of seasons: 1
Release date: August 6
Hit & Run is one of Netflix’s newest original series and is the action thriller extravaganza that we’ve been asking for. After a mysterious hit-and-run accident that kills his wife, a widowed man goes on a hunt with his ex-lover to find those responsible—and uncovers a web of lies along the way. Grab your popcorn and the edge of your seat, we have a feeling this one is going to be good.

Number of seasons: 1
Release date: August 11
Our love for cooking shows knows no bounds, and the season premiere of Bake Squad is no exception. In this competitive baking series, contestants will battle it out to create mouth-watering, eye-widening desserts to be featured at someone’s big day. It’s the lighthearted show that we all need in our lives, and we’ll 100 percent be diving headfirst into this one.

Number of seasons: 1
Release date: August 20
We have been waiting for a new series to sweep us off of our feet, and we predict that The Chair, starring our one true love Sandra Oh, will be it. Oh plays Dr. Ji-Yoon Kim as she navigates her new role as chair of the English department at a prestigious university among a wild scandal. We love a dark comedy moment more than we love most things in life, and after watching the trailer, we can confirm: This one already has our hearts.

Release date: August 1
We’ve seen it, we loved it, and we can’t wait to play it back when we’re craving a romantic drama that will leave us both laughing and ugly crying. Five Feet Apart tells the tale of Stella and Will, two teens with cystic fibrosis. Before meeting Will, Stella’s life is full of routines and boundaries meant to keep her safe and healthy. But after meeting Will, an irresistibly charming guy with the same disease, her temptation to throw all of her rules out the window is stronger than ever.

11. The Edge of Seventeen

Release date: August 1
The Edge of Seventeen is the coming-of-age movie that we turn to for laughs, drama, and inspiration. In this comedy-drama film, Nadine and Krista, two teens at peak-awkwardness, navigate their friendship and growing up against the honest, candid backdrop of modern times. With a solid 94 percent on Rotten Tomatoes, you know that this fan favorite is worth your time.

Release date: August 3
We asked for another Ryan Murphy special, and as always, our friends at Netflix delivered. In this long-awaited documentary produced by Murphy, we get a first-hand look at conversion therapy and the “pray away the gay” movement from ex-leaders and survivors. It’s profound, emotional, investigative, and heartbreaking and will definitely be on Netflix’s top 10 when it’s released.

Release date: August 11
The Kissing Booth saga fans, unite! In the third and final installment based on the novel with the same name, Elle works to balance her relationship with Noah, completing a summer bucket list with Lee, an ex-fling, and a pending college choice that will make those around her unhappy. We can’t get enough of cheesy rom-coms, and this last-of-the-series film is already giving us all of the feels.

Release date: August 13
If you’re in the market for a new thriller-action drama to fangirl over, Beckett is bound to be it. While vacationing in Greece, Beckett, an American tourist, becomes the target of a manhunt in the aftermath of a devastating accident. He finds himself in a race against time to get to the U.S. Embassy to clear his name while getting caught up in a greater web of conspiracy.

Release date: August 20
Our love for Jason Momoa is unmatched, and we can’t wait to watch Sweet Girl, where he stars as a widowed father who avenges his deceased wife and protects his daughter. This action-packed thriller will keep you on your toes and will give you the Jason fix you’ve been waiting for.

No comments to show.